Perhaps more than any other event, the so-called “Wyoming Massacre” of July 3, 1778 was a rallying cry for launching the Sullivan-Clinton Campaign in retaliation against the Iroquois. One survivor, Col. Zebulon Butler, the military leader of Wyoming Valley, personally led the burnings of Cayuga villages by the Sullivan-Clinton Campaign in September, 1779.

Click this to view a typical but not authenticated 19th century depiction: 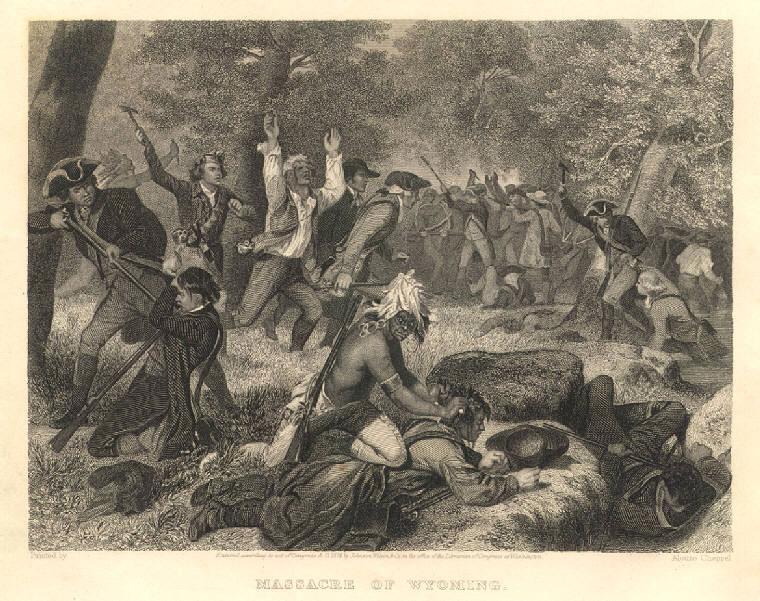 Click this to view another such not authenticated version from a painting by F.O.C. Darley:

The same viewpoint is expressed in Gertrude of Wyoming, a 19th century epic poem (1809) by the Scottish poet Thomas Campbell (1777-1844). Beyond praising the virtues of Gertrude, it especially honors a literary figure named Outalissi, a Christianized Oneida. A quintessential “noble savage,” Outalissi stands and dies with the white Civilizers (the sons of “Transatlantic Liberty”) against the onslaught of “unearthly fiends” under the very real Mohawk leader, Joseph Brandt. Click below to read some amazing excerpts:

“But this is not a time,”–he started up,
And smote his breast with wo-denouncing hand–
“This is no time to fill the joyous cup,
The Mammoth comes,–the foe,–the Monster Brandt,–
With all his howling desolating band;
These eyes have seen their blade and burning pine
Awake at once, and silence half your land.
Red is the cup they drink; but not with wine:
Awake, and watch to-night, or see no morning shine!

Scorning to wield the hatchet for his bribe,
‘Gainst Brandt himself I went to battle forth:
Accursed Brandt! he left of all my tribe
Nor man, nor child, nor thing of living birth:
No! not the dog that watch’d my household hearth,
Escaped that night of blood, upon our plains!
All perish’d!–I alone am left on earth!
To whom nor relative nor blood remains.
No! not a kindred drop that runs in human veins!

Scarce had he utter’d–when Heaven’s virge extreme
Reverberates the bomb’s descending star,
And sounds that mingled laugh,–and shout,–and scream,–
To freeze the blood in once discordant jar
Rung to the pealing thunderbolts of war.
Whoop after whoop with rack the ear assail’d;
As if unearthly fiends had burst their bar;
While rapidly the marksman’s shot prevail’d:–
And aye, as if for death, some lonely trumpet wail’d.

(The heroine, Gertrude, and other survivors behold the tragedy of Wyoming:)

Here stood secure the group, and eyed a distant scene–
A scene of death! where fires beneath the sun,
And blended arms, and white pavilions glow;
And for the business of destruction done,
Its requiem the war-horn seem’d to blow:
There, sad spectatress of her country’s wo!
The lovely Gertrude, safe from present harm,
Had laid her cheek, and clasp’d her hands of snow
On Waldegrave’s shoulder, half within his arm
Enclosed, that felt her heart, and hush’d its wild alarm!

(The dying Outalissi comforts his son with a vision of future victory:)

“And I could weep;”–th’ Oneyda chief
His descant wildly thus begun:
“But that I may not stain with grief
The death-song of my father’s son,
Or bow this head in wo!
For by my wrongs, and by my wrath!
To-morrow Areouski’s breath,
(That fires yon heaven with storms of death,)
Shall light us to the foe:
And we shall share, my Christian boy!
The foeman’s blood, the avenger’s joy!